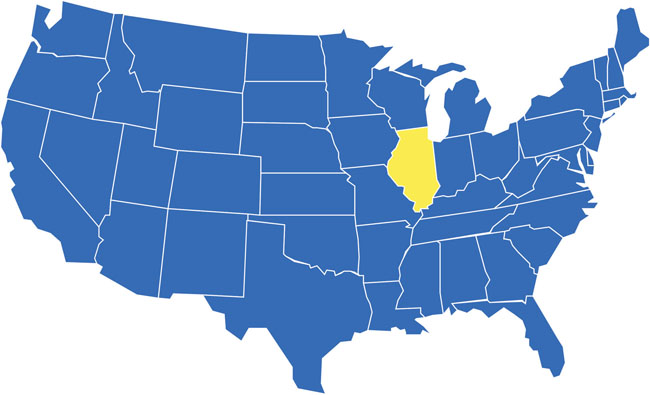 Chicago, IL, – US Supreme Court decision to uphold independent redistricting and what it means for Illinois

Although the US Supreme Court has largely opted-out of deciding partisan gerrymandering cases, in Arizona State Legislature v. Arizona Indep. Redistricting Comm’n, 135 S. Ct. 2652 (2015), the US Supreme Court recently decided to uphold Arizona’s independent redistricting commission, which was approved by Arizona voters in 2000 and has the authority to draw Arizona’s state legislative and Congressional districts without the state legislature or governor being able to alter the plan. No matter how one stands on the issue of independent redistricting committees, the case has implications for similar initiatives across the country and, in particular, in Illinois.

The context of the instant case originated 15 years ago when the Arizona voters, through a ballot initiative, vested the power of legislative district reapportionment to an independent commission. Arizona voters passed an amendment to the state’s constitution (Proposition 106), which stripped redistricting power from the state legislature and transferred it to an independent commission. The state legislature filed a lawsuit to challenge the map the Arizona Commission adopted for congressional districts in January 2012. While the Arizona legislature acknowledged that voters could control the manner of state legislative districts, the challenge alleged that Proposition 106 violated the “Elections Clause” of the United States Constitution (Art. I, §4, cl. 1). The Election Clause states, in relevant part, “Times, Places and Manner of holding Elections for… Representatives, shall be prescribed in each State by the Legislature thereof.” The Arizona legislature argued that the phrase, “the Legislature” referred only to the official lawmaking body of the state.

The Opinion, written by Justice Ruth Bader Ginsburg and joined by Justices Anthony Kennedy, Stephen Breyer, Sonia Sotomayor, and Elena Kagan, cites dictionary definitions of legislature as “the power that makes the laws,” (p. 24 ¶ 2) and in Arizona that power is extended to the voters. Arizona State Legislature, 135 S. Ct. at 2671; Ariz. Const., Art IV, pt 1 § 1. Under the Arizona constitution, the voters reserve the right to pass laws and constitutional amendments through initiatives, as was done here. The court held that in commissioning the AIRC, Arizona voters sought to restore “the core principle of republican government,” namely, “that the voters should choose their representatives, not the other way around.” Arizona State Legislature, 135 S. Ct. at 2677 citing Mitchell N. Berman, Managing Gerrymandering, 83 Tex. L. Rev. 781 (2005)

This decision was welcomed by many in Arizona, as well as other states utilizing independent commissions for redistricting, such as California. The topic of “gerrymandering” has been an issue for redistricting since 1812, however the implications of this decision reach far beyond the drawing of congressional boundaries. As a practical matter, the Supreme Court’s interpretation of what “legislature” means reinforces the legality of various other voter initiatives such as Ohio’s ban on straight ticket voting along party lines, and reaffirms the notion that power comes from the people.

In Illinois, a 2014 ballot initiative aimed at amending Section 3, Article IV of the Illinois Constitution to create an independent commission tasked with redrawing district lines for the Illinois General Assembly. The 2014 initiative failed to make it onto the ballot and was ruled unconstitutional by the Circuit Court of Cook County. The Illinois Constitution does allow voters to propose amendments by a petition signed by at least 8 percent of the total votes cast in the most recent election for Governor, but limits those changes to the “structural and procedural subjects” in the legislative article of the Illinois Constitution. If enough valid signatures are received, the amendment would then be voted upon at the next General Election. Now, a similar ballot initiative seems to gearing up for 2016, and with the US Supreme Court’s Arizona decision at its back, the final outcome may be different this cycle, which could mean a huge change for whichever party occupies the General Assembly or Governor’s Mansion in 2020 (when the map would be redrawn next).